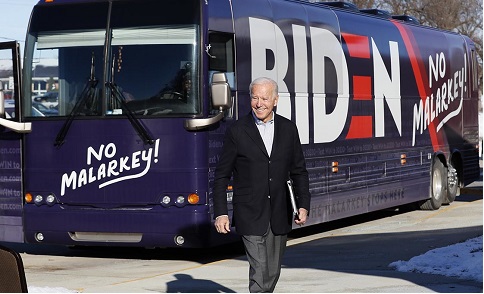 That’s why the Friendly Sons of St. Patrick of Lackawanna County should invite Hunter Biden as featured speaker to address their upcoming annual all-male dinner.

“Biden was born in the Irish heartland of Scranton, Pennsylvania, one of the most Irish cities in America. There were already political genes in his DNA,” O’Dowd wrote.

Biden recalled in the interview, “Edward F. Blewett my grandmother’s father, was the first Irish Catholic state senator. He was also the co-founder of the Friendly Sons of St. Patrick in Scranton around 1908. There is still a plaque in existence in Scranton showing he was one of the founding members.”

And, sure and begorrah, if the website for the Friendly Sons of St. Patrick of Lackawanna County doesn’t credit Edward F. Blewett with co-founding this pack of misogynistic misanthropes who to this day inflict traditional Scranton Irish-American male chauvinism on the community.

The Lackawanna County Friendly Sons website says, “In 1906 the Honorable Edward F. Blewett suggested gathering together on St. Patrick’s Day to celebrate the achievements of Ireland’s sons. The ‘Irish American Association’, later in 1939 known as ‘The Friendly Sons of Saint Patrick of Lackawanna County’ was born and has served to remind generations of Irish Americans of their heritage and the gifts of oratory, wit and music with which the Irish people are so richly endowed.”

That gift of bigoted blarney passed down only to “sons” must comprise what the man former President Barack Obama called “that scrappy kid from Scranton” was talking about in the magazine interview. But I can’t find the plaque, which shouldn’t surprise me since nobody could find the coal miners in Biden’s family he once claimed worked in Northeastern Pennsylvania’s black hell holes, either.

This unjust annual ham and cabbage dinner is right around the corner. And, even if they want to, neither Elizabeth Warren nor Amy Klobuchar, the two women running for president, or their female surrogates are allowed to attend.

Candidate Biden can show up, of course. U.S. Sen. Bob Casey Jr. and U.S. Rep Matt Cartwright, Biden’s two most powerful local elected male chauvinist cheerleaders, can show up for the dinner as well. Andrew Yang can even show up if he chooses.

Electoral peril exists for Biden and his campaign if he, Casey, Cartwright or anybody else who supports Biden’s bid for the White House continues to support apartheid against women.

Casey and Cartwright refuse to meet or talk with me about the gender prejudice they have supported for years with their silence and presence at the gathering.  Neither Casey’s nor Cartwright’s staff have responded to a year’s worth of detailed and respectful emails about the continuing discrimination both men exhibit with their bigotry.

As an Irish-American journalist in Northeastern Pennsylvania, I have written about and commented on this pathetic inequality for a quarter of a century. I met with Casey in his Scranton office four years ago to ask for his support in fostering change. I picketed his office when he refused to take action.

Instead, they chose to be treated like errant lads whose big sisters and mothers defend their shrill ignorance against outside attacks. Circling the shamrocks is a time-honored way to maintain the status quo in hard coal country even when white male tribalism strangles the life out of the future.

But, contrary to what “Uncle Joe” says, his great grandpa was not the first Irish Roman Catholic to serve in the Pennsylvania Senate, according to the official state Senate website. That honor goes to the Hon. William McSherry (McSherrystown, Adams County), 1813-1817, whose son, James, also served in the Senate during the Civil War.

Slap this on a plaque somewhere in Scranton: Discrimination and lies still brew frothy bubbles in the Biden DNA.  Dishonesty and prejudice still shapes the “scrappy” Biden family legacy.