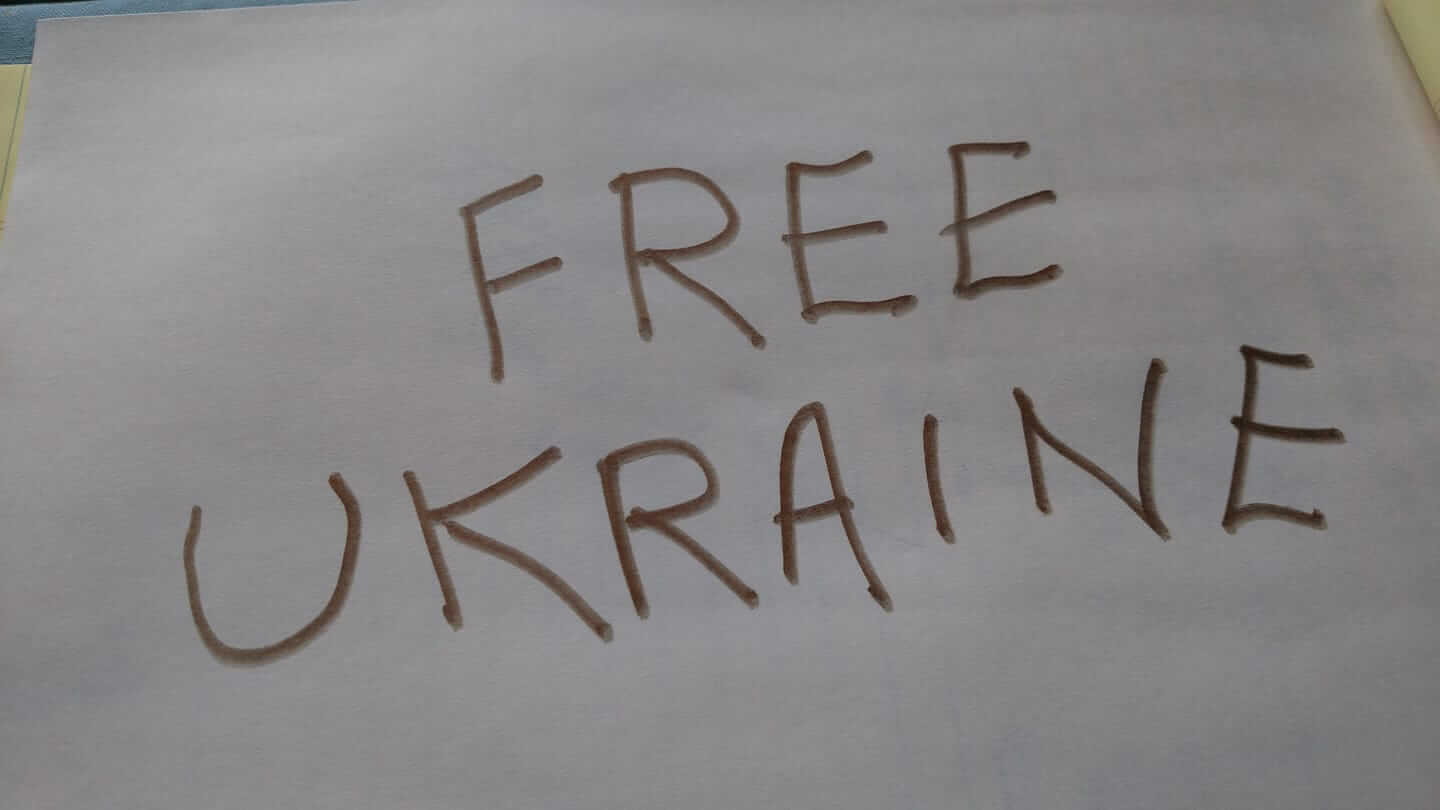 Svitlana reached for three empties her daughter held out.

Marveling at his family over a flickering blue flame that lit his last cigarette, Andriy crumpled and stuffed the pack in his down jacket pocket. Exhaling white smoke through his nose he spoke to Kateryna in a voice as low as his mood.

“Don’t you have ballet practice?”

The child looked at the linoleum floor.

“I forget how to dance,” she said.

“You’re upset,” Svitlana said. “When this is over you’ll remember every step.”

Jerking her head toward her husband Svitlana snapped words like whiplash.

Andriy pointed to a dozen more bottles on the floor.

“Natalka next door,” Svitlana said. “I cut up your oldest jeans for wicks and siphoned gasoline from the car. I took packing peanuts from boxes I keep in the closet.”

“Natalka says the foam sticks to skin and burns into bone when you catch fire from Molotov cocktails.”

“To kill Russians,” she said.

Andriy turned on his daughter.

Looking at Svitlana, Andriy struggled to hold his temper.

“You teach our daughter to make explosives to kill Russians?”

Folding his hands as if in prayer, Andriy said, “Go to your room, Kateryna. Decide what to take if we must leave.”

“Fine,” Kateryna said. “I’ll see if any of your empty beer bottles rolled under my bed.”

Svitlana filled another green bottle with gasoline. She used a sharp potato paring knife to cut the white foam peanuts into tiny pieces which she shoved into the neck. She capped the top with a twisted blue strip of faded denim.

“Do you really know what you’re doing?”

Andriy felt alone for the first time since he and Svitlana married in the Saint Sophia Cathedral in Kyiv 12 years ago.

“I’m resisting war like you should be doing,” Svitlana said.

Andriy wanted only to surrender.

“You’re making deadly weapons with our baby girl,” he said.

“Do you know what you’re doing to Kateryna?”

“Preparing her to stand up for what she believes in.”

“Is freedom won by making others suffer as much or more than we do?”

“You twist everything,” Svitlana said. “You sound like Putin.”

Squealing with excitement, Kateryna raced back into the room.

“The men outside my window blew me kisses. Oh, my God, they’re so cute. They have rifles.”

“They’d be better off at dance class,” Andriy said.

Svitlana burned with anger. Or was it patriotism? Or hatred? Or all three?

“You really don’t understand, do you, Andriy?”

Within three days the family separated. Andriy and Svitlana said a strained goodbye at the railroad station. Kateryna, never before having traveled by train, looked forward to the trip to Poland. Before they boarded Svitlana kissed her husband lightly on the cheek.

“Glory to Ukraine. Glory to the heroes,” she said.

“Call me when you arrive,” he said.

Fearful with foreboding doom, Andriy never expected to see his wife and daughter again. As he turned from the slow moving train packed with women and children, the automatic rifle hanging from his shoulder slipped. Grabbing the barrel, he worried the used Kalashnikov he picked up that morning at the library might accidentally go off. That’s all he needed, to finally agree to fight and get shot and killed by one of his neighbors who mistook him for an invader. In the eyes of many he was a saboteur hindering the struggle with a bad attitude.

Andriy hated guns, fighting, violence, even arguing. Chess, reading, writing poetry and cooking Chicken Kiev (even spelling the city the Russian way in his handwritten recipe book) appealed to the deepest reaches of his spirit. Bold gold patriotism sounded nice but the concept got complicated, even lost, when you asked people to explain what responsibilities came with wrapping yourself in the Ukrainian flag.

Did the Porsche owners, mostly bankers and financial brokers who fled the country under cover of darkness carrying suitcases loaded with cash, bear the same burden his wife and daughter hauled in their knapsacks packed with stale bread, hard cheese rinds and what was left of Svitlana’s blood pressure medication? Did Russian Mafia bosses encounter difficulty getting out of the country? Did mob enforcers wearing thick gold chains stick around to help save the nation or escape with their mistresses to stroll the boardwalk in Brighton Beach, New York, by next weekend?

Checking his watch, Andriy looked for the truck that would transport him to his post, a bridge where he would stand guard against the coming tanks. Out of cigarettes, he wondered where he could buy more. Or steal more. Looting crossed his mind for the first time in his life. If need be he’d steal cigarettes if other looters left any for him. A citizen soldier now, Andriy could do anything; take anything, loot, pillage, rape, kill, torture all in the name of upholding liberty. A disturbing sense of power stunned his brain.

So did a sudden urge to empty his bowels. Where could he go? What would he do if he failed to find a toilet? He imagined his bloated intestines pushing against his growling belly. How many others must feel the same as they smelled themselves ready to explode? What if he just weakened and let go? Would anybody notice or shame him if they did? Andriy’s nation had turned to shit. So embarrassed he wanted to cry, he wondered what Svitlana would say if she knew of his dilemma? Worse, what would Kateryna say?

A Russian armored car turning the corner jolted Andriy from his thoughtful misery. Before he could turn and run, the vehicle detonated. A lone Ukrainian soldier ran across the street holding a smoking shoulder-fired anti-tank weapon. One Russian survivor struggled to stand in what was left of his still sizzling uniform and stumbled forward, heading straight for Andriy who pointed his rifle at the man’s face. Old for a soldier on any side, with soft cheeks that once shined rosy in winter, the Russian Marine coughed blood and spoke in Ukrainian.

Andriy thought of calling Svitlana on the cellphone in his pocket, asking to speak with his daughter and telling Kateryna he had captured an enemy prisoner but didn’t know what to do with him. He’d tell her that more than anything in the world he wanted to take ballet classes with her when she returned home and peace resumed. In his mind he heard Kateryna laugh knowing he must be kidding when she said, “You are so funny.”

All around Andriy people screamed, fired guns, fell in the street. A Molotov cocktail flew through the air from a doorway. Watching the green glass sail high beneath a burning wick, Andriy wondered if his daughter helped make that bomb.

How could she do such a terrible thing?

Katetyna brought joy to the world.

At that very moment she must be practicing ballet in Warsaw.